Ramona Rousseau-Reid and a few of her neighbors had just formed a group called the Eastwick Action Committee (EAC) when a resident spotted engineers doing land survey work on a vast parcel of wooded land between 86th Street and the John Heinz National Wildlife Refuge.

The neighbor asked what they were doing and the surveyors said they were hired by the Korman Company.  Turned out the City government gave Korman permission to develop this land decades ago as part of the transformation of Eastwick from lower-density marshland to suburban style housing. Now they were finally developing it.  Two EAC members went directly to the Korman office to ask about it, and learned that they planned to build 722 new apartments and 1034 new parking spaces on floodplain land in their community.

“We were horrified when we got the news,” Ramona said.  EAC found out that Korman needed to change the lot’s zoning from single-family homes to multi-family in order to build apartments. Because Eastwick didn’t have a Registered Community Organization (RCO) to host a public meeting to vote on whether apartments should be built, Korman could go straight to the District Councilman for approval. Ramona knew she and her neighbors needed to act fast, though she and some EAC members hadn’t been part of community groups since the 1990s and “didn’t know each other that well yet.”

EAC contacted the Friends of Heinz Refuge (FOHR), who were equally concerned. Though both groups were made up of different people, “we saw we had a lot in common in terms of our interest in land use and the Eastwick community.” They decided to “form a united front” as the Eastwick Friends & Neighbors Coalition (EFNC) around stopping the development from happening as it was proposed, which they believed would have major negative environmental impacts on the community.

Environmentalists use advocacy frequently, so the Friends were able to connect Ramona and EFNC to other professionals that helped them advocate for their cause, including the Delaware River Keeper Network, Keystone Conservation Trust, Audubon Pennsylvania, Darby Creek Valley Association, and the Pennsylvania chapter of the Sierra Club. 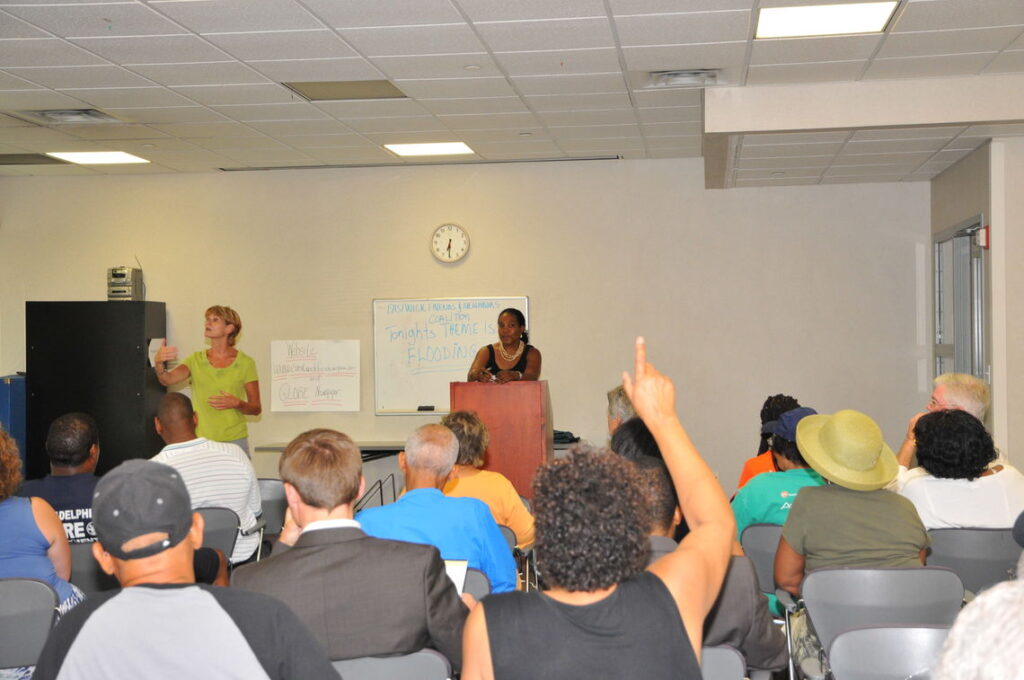 "Tonight's theme is: FLOODING at a July 2012 EFNC educational meeting. 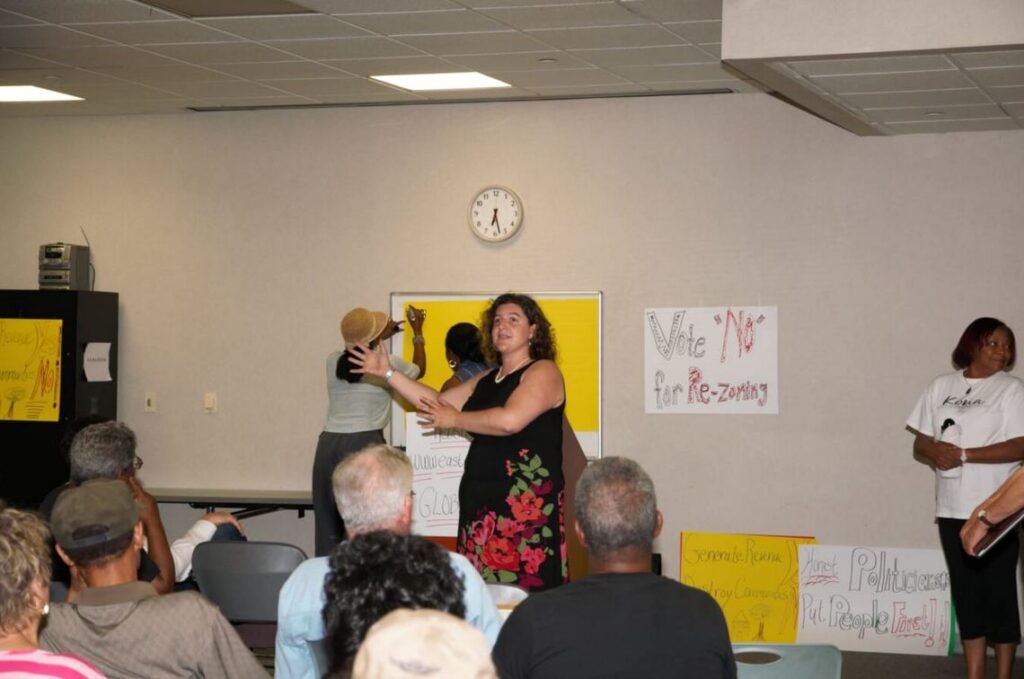 Amy Laura Cahn from the Public Interest Law Center presents about the environmental issues of the proposed development. 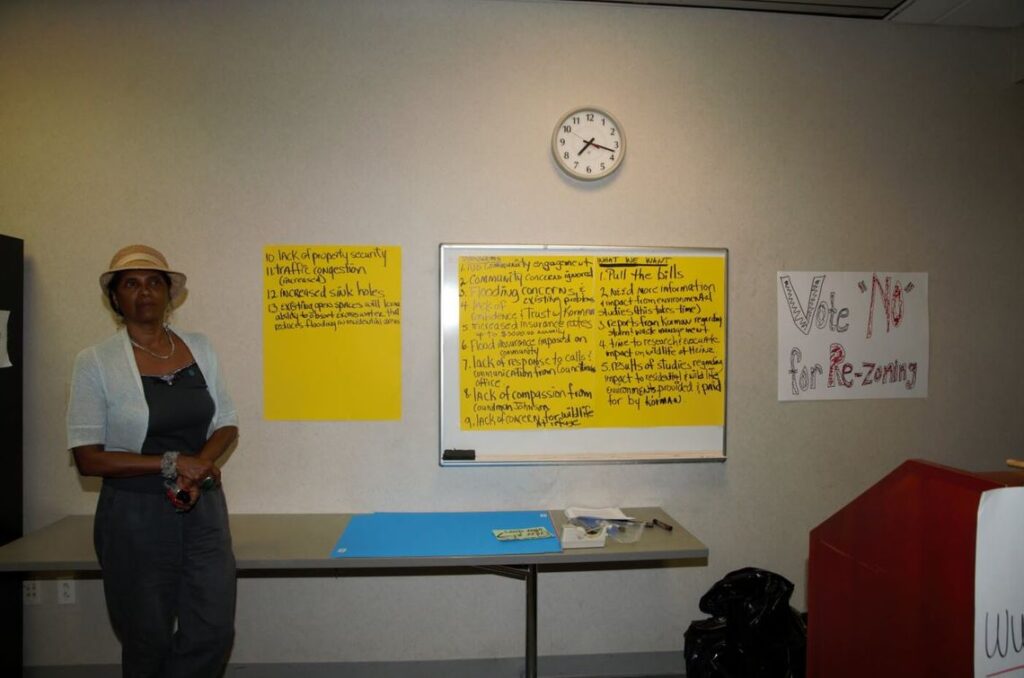 "Vote NO to Rezoning" at a July 2012 EFNC educational meeting.

The Friends and these other partners educated EFNC on the details of the environmental dangers posed by this development, which Ramona recounts took “hours of meetings.” During this organizing process, EFNC also wrote a mission statement, elected officers, and retained free legal counsel from the Public Interest Law Center and Dechert LLP.

Korman was scheduled to present at a EFNC community meeting. Ramona knew she needed to pack these meetings with neighbors if there was any hope of changing this development. She and fellow EFNC board members had to meet all their neighbors, tell them the complicated story of Eastwick and its place on environmentally important marshland, and then convince them to take time out of their personal schedules to protest a development that had been in the works and approved by the City for decades. 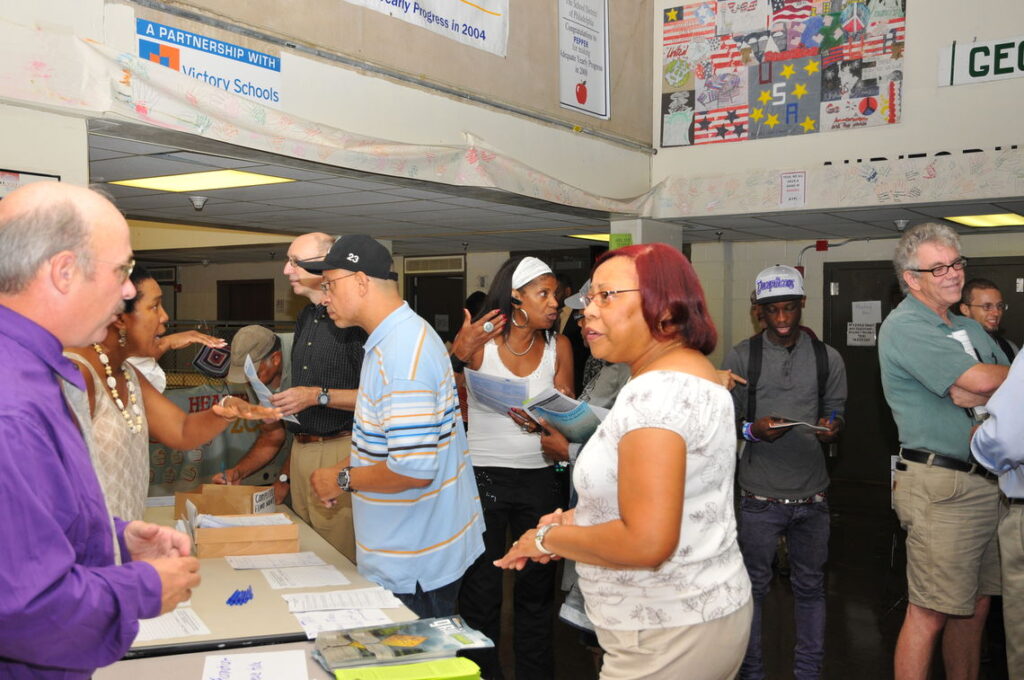 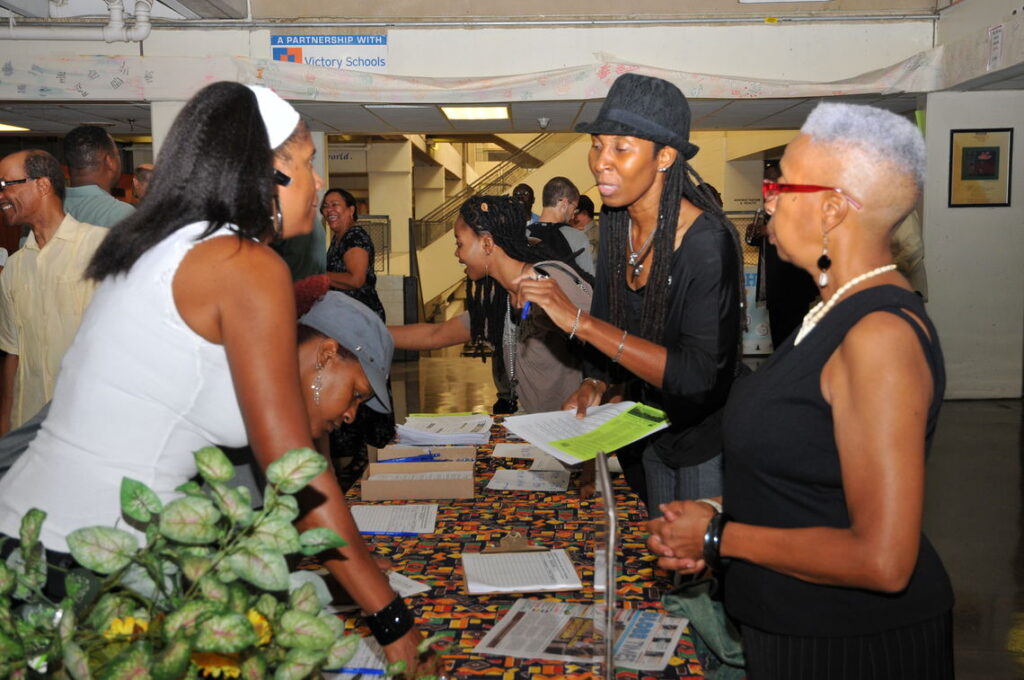 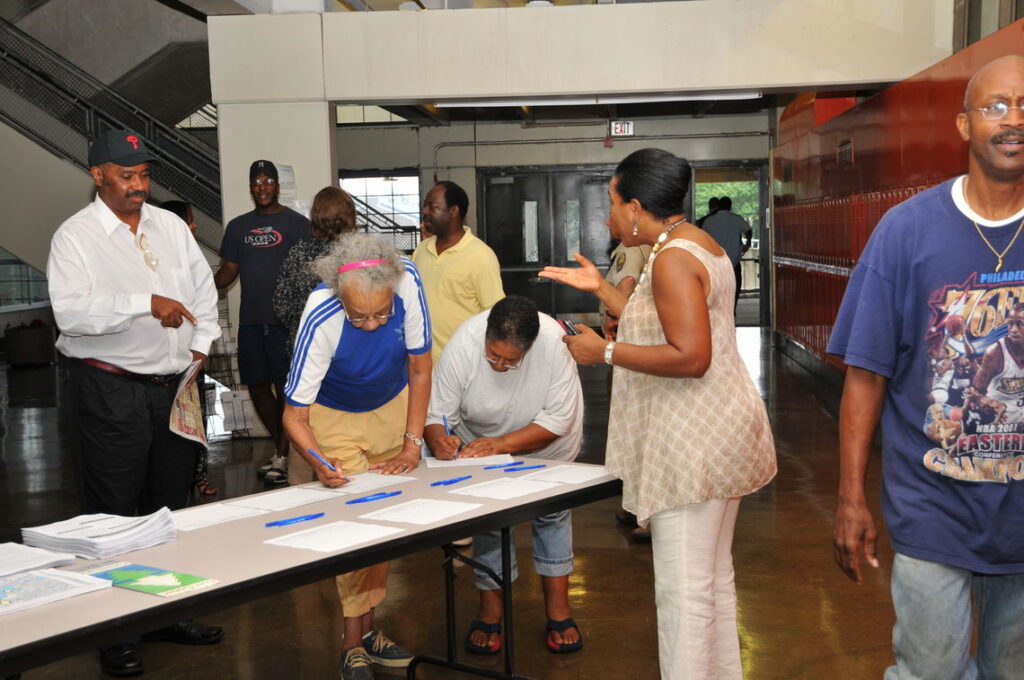 Ramona and EFNC set out to reach all 5,500 Eastwick residents and did just that! They personally financed necessary supplies and sometimes borrowed printer paper from their workplaces to make flyers to hand out door-to-door. They also waited outside the Eastwick Regional Rail station and the Penrose shopping mall parking lot in all weather, where they casually started conversations asking if people knew about the historic problems the neighborhood has had with flooding. Ramona even hopped on the SEPTA Regional Rail train with people sometimes to continue talking, and then turned around and came back!

“We knew we needed to educate people before the meeting, so we took as long as it took to have conversations with any residents who had questions. It was so imperative that residents [came to meetings]. We’d tell them ‘You must have a voice, we have to stand strong.’”

Thanks to four full days of outreach, there was a huge turnout at the community meeting. Korman was surprised by the emotional reaction of neighbors to the proposed development, which was not only because of the environmental risks and the fact that “you can’t build like that in the floodplain, that’s preposterous,” as Ramona put it. 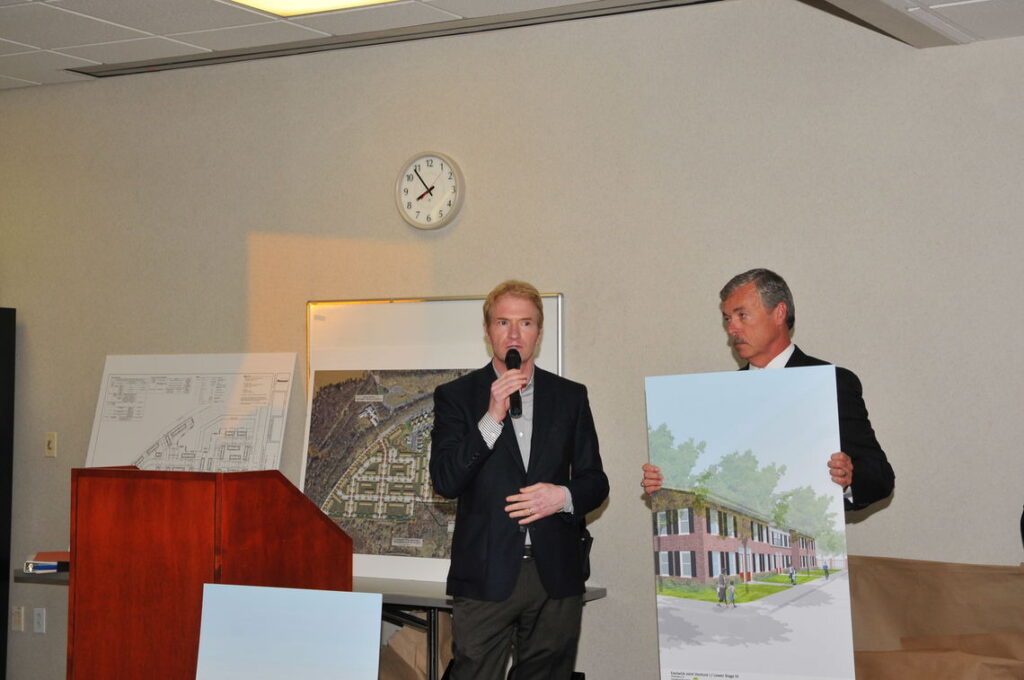 Korman representatives present their proposed development at an EFNC meeting. 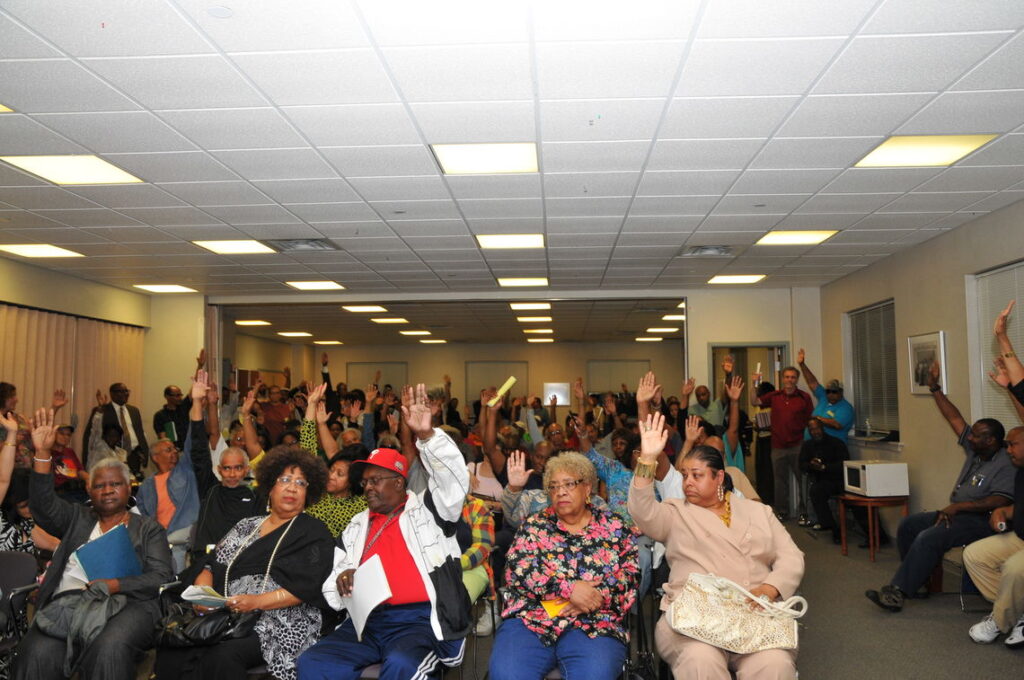 Their reaction was also due to the fact that this proposal was yet another missed opportunity for the economic development neighbors have been promised since the mid-20th century when thousands of residents were displaced by the promise of urban renewal in their neighborhood that never happened.

The next step was outreach to the Councilman’s office. EFNC called his office directly to ask for a meeting to educate the relatively new Council member on Eastwick’s history and environmental concerns. They invited him to a community meeting and packed the house; by that time, neighbors recognized Ramona and EFNC outreach team members and knew how important this was. “We needed a movement,” Ramona said. 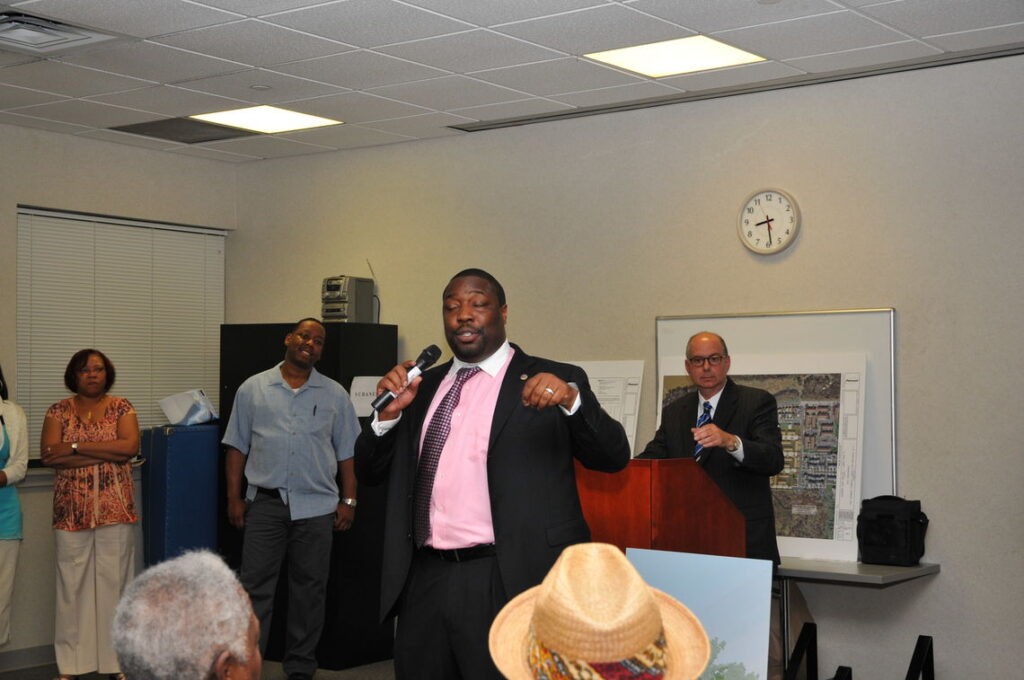 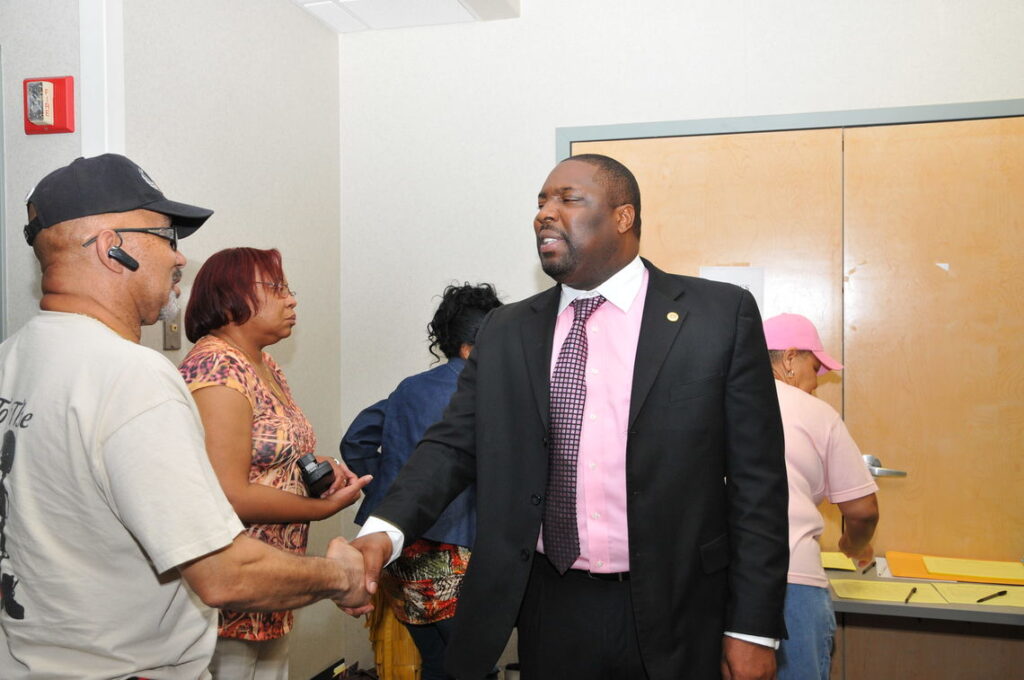 The Councilman still introduced the zoning bill anyway, but environmentalists, their free lawyers, and over 100 neighbors attended the public hearing and gave two dozen testimonies. The Councilman tabled the bill that day and eventually pulled it altogether.

“They didn’t expect the community to be as forceful as we did. They had to hear us.”

Since tackling the Korman development, EFNC has become a Registered Community Organization, received various City grants, been awarded the Empowerment Award from The Bread & Roses Funding, and still works actively to make sure neighborhood interests are well represented in any future planning and development efforts. The Councilman now notifies the group when there are any potential projects in the neighborhood.

In December 2015, Ramona and other EFNC members were there when the Philadelphia Redevelopment Authority terminated their agreement with Korman, returning that large piece of marshland back to City ownership. “Some of us were teary eyed…shows that when you know something to be right in your spirit, if you totally commit to it, people will see that passion and come to your aid.”

Ramona calls the EAC’s leaders “a great unit of friendship and collaboration” and she still lives by her “do what you have to do” approach to outreach, making whatever time is needed to make sure the community has a voice.