Putting a Commercial Corridor on the Map

Sheila Howard returned to her neighborhood of Tioga and found that it no longer had the businesses that every community needs to thrive.  No dry cleaners, no places to eat breakfast, etc.

“The neighborhood had been depleted…not like it was when I was raised there,” she recounted.

At the time, Tioga United was working with the Community Design Collaborative and local residents to envision how to make this stretch of 17th Street more beautiful, but no one had spoken with business owners yet. Sheila decided to hold a meeting for business owners; to make it easy for the businesses, she arranged a meeting time and place, all they had to do was show up.

In order to reach the owners and get them to come, Sheila visited all the shops on 17th Street to talk to them. “Because I was from Tioga United, they were willing to hear me out,”  Sheila said. She also flyered with her grandkids’ help and sent text reminders, which she discovered was a more reliable form of communication–when she called the businesses it usually wasn’t the owners who answered the phone.

Her hard work paid off and eight business owners showed up to talk about their issues! They agreed that making 17th Street more attractive and active was important, but didn’t want to start a formal business association to do so.

Instead, Sheila agreed to become the point person, taking the role of organizer on herself and being intentional and specific about what she asked of the businesses. Sheila recalled how:

“I had to do all the logistical stuff. I took that off their plate so they would be engaged and stay involved. I didn’t promise I could cure all their ills, but I stressed that we could work together.”

Sheila did this in two big ways: pushing the City’s Commerce Department to contribute funding, and organizing a Clean and Green Day.  The businesses agreed they wanted to spruce up their properties, but said they needed the City’s Storefront Improvement Program (SIP) to do it.  This stretch of 17th Street wasn’t on the City’s list of eligible commercial corridors, but that didn’t stop Sheila.

After many meetings, phone calls, and emails from Sheila, Commerce staff took the bus up from Center City to 17th Street to take a look.  Sheila didn’t have much time to plan, but she texted the business owners and several came out, ready to sign up for the program.  This showed Commerce the business owners’ commitment, and they allowed them to enroll in SIP!

Sheila knew there were more corridor improvements needed and came up with the idea for a Clean and Green Day that would help business owners while also involving nearby Block Captains. The event combined a clean-up with a tree planting, and was a big success!

The local hardware store donated supplies to paint the tree planters and curbs, one business opened its parking lot as a community space for the day, a local church held a flea market and games for kids, and 31 trees were planted by volunteers. 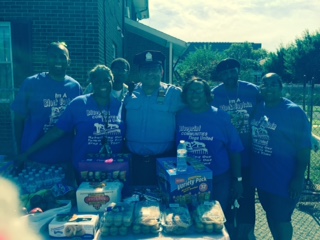 But Sheila didn’t stop there.  In the process of organizing the Clean and Green Day, she formed a block captain coalition. “If you’re a good block captain, you’re organized and everyone knows what’s going on,” Sheila said.  She built up the membership by asking Tioga United for the phone numbers and email addresses of block captains they knew of, and also asking them to let other dedicated neighbors know about the coalition.

She ended up with a coalition of 27 block captains, and surveyed them about what their two biggest issues were. The top response was to clean dirty alleyways.  So just two months after the Clean and Green Day, Shelia organized a Clean Alleys Project.  She organized four separate events where one alley was cleaned each day, one of which was connected to the 17th Street corridor.

Tioga United donated supplies, Gaudenzia House donated volunteer labor, the block captains on those blocks prepared a meal for the volunteers, and other neighbors on those blocks cleaned their front yards the same day.  These events were so successful that members of Sheila’s coalition are now meeting together to plan other events around the neighborhood!  Sheila described how:

“People want to align with success, so if you show a victory, people will come out and want to join.”