Getting a Seat at the Table with a University

When Mike Jones moved to Powelton Village in 1998, he could see the neighborhood was changing significantly, primarily due to neighboring Drexel University shifting from a commuter school to a residential school. Powelton Village homeowners now found themselves living next to new neighbors: college students.

Mike and other members of the Powelton Village Civic Association (PVCA) have worked hard to preserve quality of life for all residents during this transition. In the mid-2000s, Drexel proposed a large student housing project at 32nd and Powelton on a site that they had previously agreed would be greenspace. PVCA said, “no!” and went into their archives to show the communications between Drexel, PVCA, and Council in which Drexel committed to making the parcel greenspace. They also fundraised to hire a lawyer by writing letters to neighbors and going door-to-door.

It worked; their Councilwoman held the zoning bill until Drexel could reach an agreement with neighbors. Drexel did not end up building housing on that site, instead it is a public space, as promised, called Drexel Park.

Mike saw this as a return to “This notion of standing up for what you believe in and fighting for it.” He continued:

“It required raising a ton of money for lawyer bills, getting a ton of people out to Planning Commission and ZBA meetings, and raising a lot of ruckus–getting articles in the newspaper and all that. But it’s worth doing.”

After the negotiation around Drexel Park, both Drexel and PVCA agreed that they needed to meet more regularly so that Drexel could understand neighborhood priorities and PVCA could see Drexel’s long-term expansion plans.

They’ve been meeting bi-weekly for over a decade now. Topics and participants vary, but now that the community is seen as a serious stakeholder, there have been a variety of improvements and partnerships that are more collaborative in nature. “The conversation wasn’t complete without us,” Mike said.

One early example was neighbors showing Drexel senior staff what a Friday night in Powelton Village was like. Mike introduced them to a student-run website that published locations and photos from parties. This led to an important discovery for Drexel that their students were living in places they didn’t know about — sometimes in questionable conditions– and were not behaving as good neighbors.

Mike also researched other cities and passed along recommendations on how other places handle expanding college neighborhoods. Drexel subsequently began requiring that landlords stick to certain living standards if Drexel was going to promote them as approved student housing.

Drexel also responded to the situation with students living off-campus by building more Drexel-run student housing in the neighborhood. At that point, PVCA knew they needed to create a neighborhood plan to codify the community’s voice in order for it to be accounted for in Drexel’s new developments. 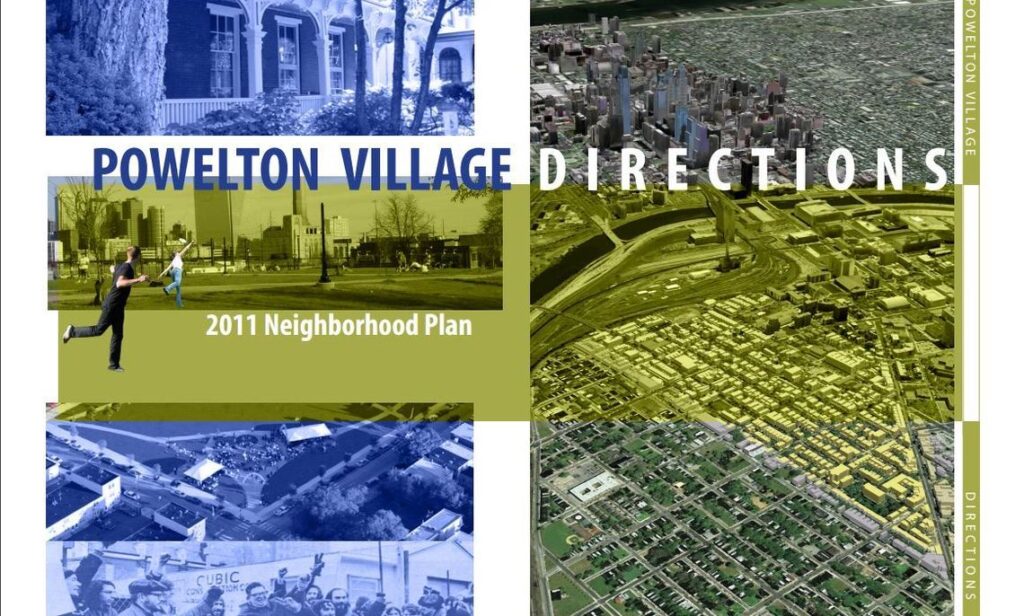 Mike was the PVCA rep on the University City District (UCD) board at the time, and he asked them to apply for funding for the Powelton Village neighborhood plan. They secured the funds, and PVCA proceeded to work closely with neighbors (owners and renters), business owners, and non-profits to ensure everyone’s voice was incorporated into the plan.

Most importantly, PVCA leaders made sure the plan incorporated Drexel’s development plans, specifying where development was acceptable to community members:

“We needed a way to anticipate that large-scale development is coming our way – Drexel needs it – so where do we want it to go so it has the least impact? These are conversations we couldn’t have had previously because we were always in crisis mode.”

Mike said it was in their interest to be thoughtful about where large development made sense in the neighborhood. Because their plan balanced resident and university interests, Powelton Village residents are taken seriously by Drexel and have an influential voice. Upon completion of the plan, Drexel even invited PVCA to have two residents sit on their Steering Committee for their own master plan.

PVCA’s neighborhood planning process was so “eye-opening” that they pushed for a similar process again when the old University City High School (UCHS) site at 36th and Filbert was put up for sale.  Anticipating the sale of the site, PVCA re-drew their neighborhood boundaries to include the site and ensure that they would have a voice in the proposal. 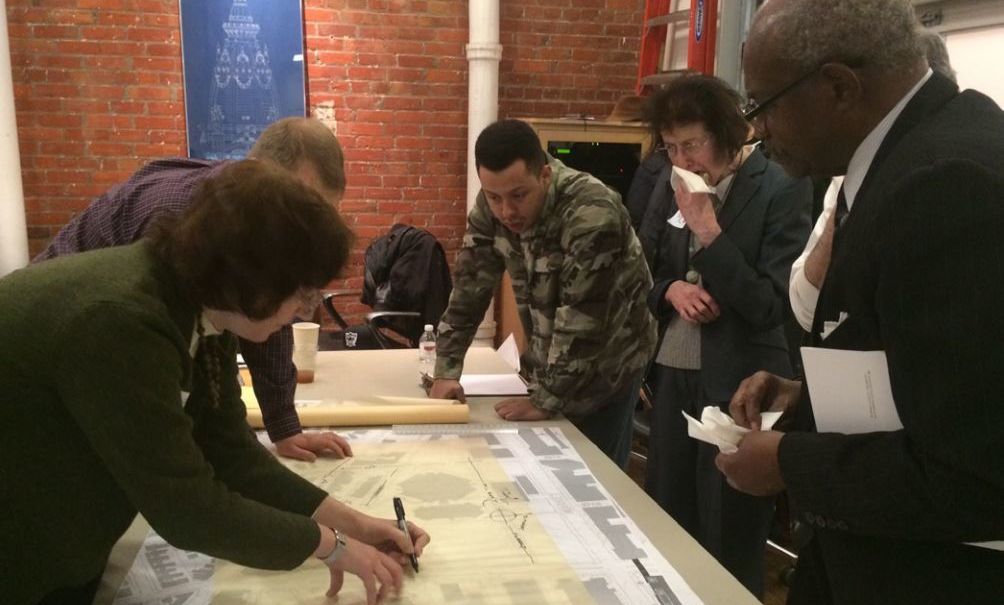 Architects, Drexel representatives, and neighborhood residents all worked together at the UCHS workshop. 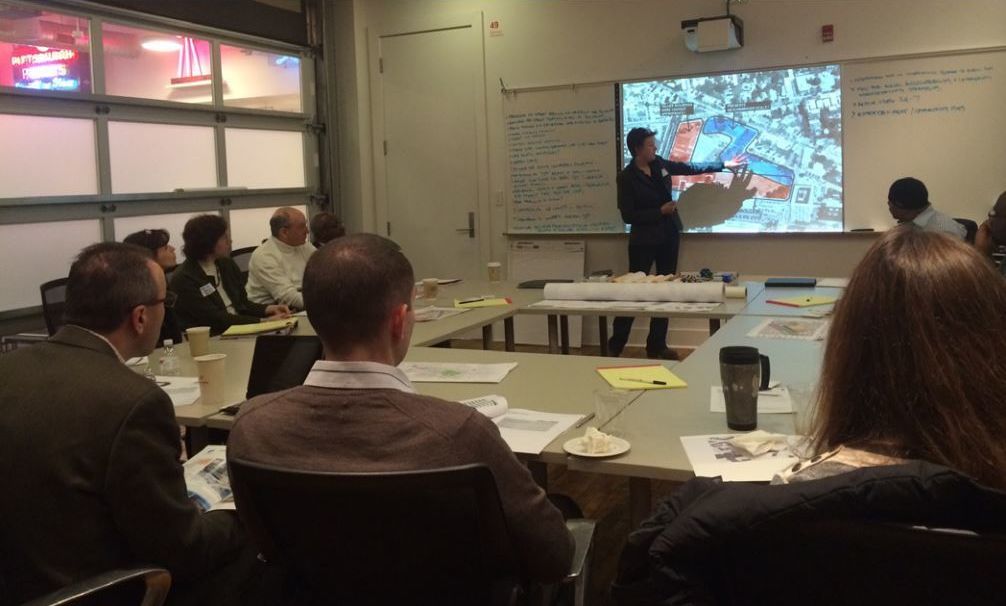 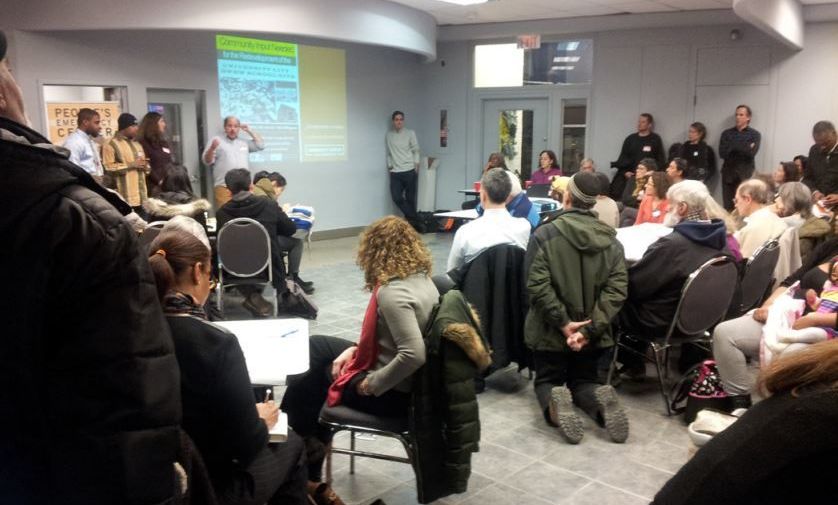 Before the workshop, PVCA held a community meeting to educate neighbors on the site and process.

People’s Emergency Center CDC (PECCDC) worked with the civic associations in Powelton Village, West Powelton, Saunders Park, and Mantua to host a design workshop for the UCHS site with the help of planning consultants PEC hired. Pro-bono consultants from the Community Design Collaborative then helped write a report based on the information that was collected from the workshop.

Nearly 200 neighbors attended and talked about what they wanted to see when that site got redeveloped, and the report summarizing the workshop was submitted to the School Reform Commission and became the basis for a Community Benefits Agreement (CBA) signed by Drexel and three nearby community groups when Drexel purchased the site.

The process was “tremendously successful at building coalitions,” Mike said. The CBA was negotiated by lawyers, which PVCA at this point has recognized as expensive but necessary when large developments are proposed. PVCA and PECCDC covered the attorney fees; PVCA fundraised among neighbors again for their contribution.  “It wasn’t hard for people to see how important this was,” Mike said.

PVCA hasn’t needed to legally enforce the provisions of the CBA, but feel the agreement brings a “moral commitment” that would be hard to veer from because Drexel and the local community groups plan to work together for decades to come.

Mike is pleased to see that the CBA has been upheld so far.  Its goals include increasing homeownership in Powelton Village to 25% and building a new school on the UCHS site. An advisory committee has been formed with representatives from all nearby neighborhoods to review updates on the development on a monthly basis.