Warren has done everything from zoning to violence prevention, rec center rehab to community building, in his Grays Ferry neighborhood.

The common thread running through each of Warren Bullard’s community improvement projects is a commitment to partnership.

I learned during CPI about the need for partnering with others in order to mobilize and engage the community in advocating for their own community.

The road to neighborhood improvements was not always smooth. Warren applied to CPI with an interest in amplifying the voice for Philadelphians who feel they don’t have a say in how the City changes. Warren says, “I had a desire to empower people with the necessary information with which they are able to make decisions suited to their needs as well as the City, overall.”

Through CPI, he learned about turning vacant lots into mini parks. This inspired him to write an Action Plan: Greening Grays Ferry.

His work hit a major obstacle when he discovered that developers had a new interest in buying neighborhood empty lots to build new housing.

Warren didn’t quit! He followed other opportunities. He joined the Grays Ferry Community Council and shared what he learned from CPI with the zoning committee.

Warren also got a developer to do an $80,000 rehab of the Barrett Center, a community center in the neighborhood in need of repair!

The rehab is in full swing. The expanded center will serve the community as a space for community meetings, narcotics anonymous meetings, a boxing program, and services for the elderly.

Recognizing that his initial greening plan had to change, Warren looked to the City for help improving existing parks and playgrounds instead.

He used information he learned from CPI about City departments and available funding. And of course, those relationship-building skills!

The time invested in building the bridge between his neighborhood and the City paid off!  Parks and Recreation and the Water Department dedicated funding to improve Lanier Park and retrofit the space to manage water runoff from nearby streets when it rained. 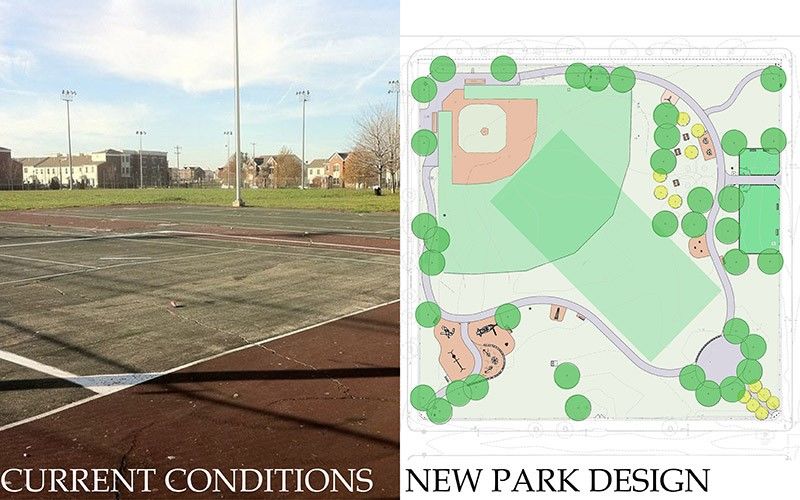 The current conditions and new vision for Lanier Park. Photo Credit: Design by AKRF, Image and rendering by TPL staff

Also working with the Trust for Public Land, Warren and his community contributed ideas and direction for the new park design, which includes a dog park, new playground, water play spaces, and outdoor fitness space.

In addition to showing some love to his neighborhood’s built environment, Warren is working to revitalize community relationships, too.

He is organizing a gun buy-back program for the area, sparked by community concerns about crime and violence. He is also part of a team that is working to build bridges between surrounding neighborhoods which in the past have been divided. Warren even worked with a few developers to get them to hire neighborhood residents to work on their local projects.

His latest work is in putting together a coalition of area Registered Community Organizations (RCOs) to form a common agenda and take collective action. The alliance will also share successful strategies. Warren says, “I have personally instructed groups how to appeal zoning decisions in Common Pleas court.”

Of his tremendous contributions to the neighborhood, Warren says, “I am the type who prefers to work behind the scenes without any fanfare.” And he’s not done! Warren says that if he had the resources available,

My dream project would be to create a series of mini parks in the area for neighborhood use.

Though he prefers to stay out of the limelight the power of his work shines through. This Citizen Planner is a force for good in Grays Ferry!