I'm helping bring an old school building back to life.

When Lily attended Citizens Planning Institute, she was wrapping up a year as the Community Partnership Coordinator Americorps VISTA at Southwark School. CPI helped her figure out her next career move; she now serves as the Outreach Coordinator for Scout Ltd. and brings her Citizen Planner know-how to the position.

When I took CPI, I was trying to figure out what my next step was…CPI put me in the mindset of seeing how planning is really important to determining how a neighborhood feels and what people’s experiences are. Getting involved with Scout seemed like an opportunity to have even more of an influence, and I’m going to try make it as community-focused as I can.

Scout Ltd. is an urban design and development firm that purchased the former Edward W. Bok Technical High School building, a public school that was shut down in 2013. Lily has been working with the company to bring the building back to life as something that serves the community and allows the space to tell the story of its history. 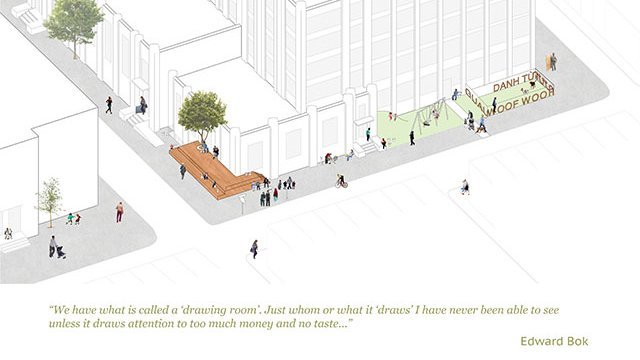 The knowledge Lily gained at CPI has come in handy; the CPI zoning class helped her understand what the Bok School building’s IRMX zoning means!

Knowing what is permitted in the building’s base zoning district comes in handy as Lily helps determine what type of uses Scout seeks for the building. While very early in the leasing process, the company envisions bringing in artists, makers, and tradespeople, honoring the building’s past as a vocational high school. Additionally, Scout is interested in bringing in non-profits who provide direct services to community members.

Lily’s work is informed by CPI, which introduced her to people in the city who are finding unique solutions to their neighborhoods’ unique challenges. “People have been organizing in and serving Philadelphia neighborhoods for generations,” she explains, “I’m trying to create partnerships with the community, bring people together, and not reinvent the wheel but work with those already doing good work in the neighborhood and the City.”

She continues to listen and learn from her neighbors, and recently brought the national storytelling organization StoryCorps to South Philadelphia for the first time ever, in order to honor the history of the building and the surrounding neighborhood and celebrate its stories.  A diverse group of South Philly residents, including Bok School alums from several decades, recorded their stories, which are now permanently preserved in the Library Congress and will be available to the community in the coming months, though Lily is still thinking through the most creative and accessible way to make these stories public.

Lily helped approach an opportunity for public space on the Bok Building’s property like a true Citizen Planner.

Something I learned from CPI is that you should listen and observe how people like to use the space. For example, people from all different backgrounds have already been using an area on the side of the building as dog park, so we are going to make it into a more formalized dog park space and provide amenities… Some of the assets the school has are rare in the neighborhood and we are trying to make sure they’re something the neighborhood can continue to enjoy.