I connect CDCs and community groups with state funding opportunities.

Jasmine Sadat already had a Master’s Degree in City Planning when she participated in CPI, but she had received her planning education at the University of California – Berkeley, and wanted to gain more Philadelphia-specific planning knowledge.

For her final project, Jasmine proposed beautification and lighting improvements to the 25th Street Viaduct that runs through her neighborhood of Point Breeze.

She drew particularly on learnings from about Philadelphia2035 from CPI’s core class on “What is Planning,” as well as on takeaways from two elective classes offered in Fall 2015: Creative Placemaking and Community Safety Through Design.

At the time, she was also working as the very first city planner to be hired to serve as a planner on City Council staff! Jasmine worked for the 2nd Council District, where she also lives.

After completing CPI, she went on to a new position as Southeast Region Deputy Director at the Pennsylvania Department of Community and Economic Development (DCED)!

In her new role, she is tasked with helping community groups and non-profits in Bucks, Chester, Montgomery, Delaware and Philadelphia Counties to apply for the programs offered by DCED. Jasmine was selected because of her ability to get people engaged and increase participation in their programs.

CPI helped Jasmine learn how to work with diverse neighborhoods and types of organizations, and to never make assumptions:

CPI taught me to be open-minded. Especially during the final project presentations, you learn what people from other neighborhoods are trying to achieve. You may assume someone is going in one direction, but if you hear them out they end up saying the opposite. So now in my work, when I’m visiting with these organizations, I let them tell their whole story and try to see how I can support what they’re doing.

She is able to draw on connections she made both when serving as City Council staff and during CPI. Jasmine uses these connections to help increase involvement of minority-based groups.

What does her day-to-day work look like? Meeting with all types of groups, learning about their short- and long-term initiatives, and seeing if any of the programs offered by DCED align with what they’re trying to do.

These programs include the Business Opportunity Fund, loan programs for minority-owned businesses, tax credit programs, Keystone Communities Program (incorporates Main Street and Elm Street funding), and the most popular: Neighborhood Assistance Program, in which an organization finds a corporate sponsor to support their initiative and in exchange they receive a tax break.

Like a true Citizen Planner, when presenting on these programs, Jasmine always emphasizes ways the funds can be used for pedestrian safety, increased lighting, and other improvements that focus on walking, biking, and using public transportation.

Jasmine emphasized that DCED has a streamlined application process meaning there is one application to apply for any of their programs, which significantly lowers the barrier to applying for and potentially accessing funds.

She also advocates for less popular programs that can have a significant impact on neighborhoods, such as the Greenways, Trails and Recreation grant program that opens in March. “It’s awesome!” Jasmine enthuses.

She encourages organizations to apply for this funding for any small amount of greenspace they might have in their neighborhood, in order to expand it. For example, in Old City there aren’t many public parks, so Jasmine encourages them to apply for this program to use with any new developments that have a little bit of outdoor space or oddly shaped parcels, in order to try to expand it.

CPI also made her realize the importance of collaboration, something she advocates for often in her new role.

I remember one group exercise during CPI, I assumed I knew what the finished product would be at the beginning, but then at the end we had collaborated and created something completely different. I learned to always be open and see what could manifest.

Now, when visiting CDCs in Philadelphia, she encourages them to think longer-term and to collaborate more with other local groups.

The last thing I want is for different organizations in the same neighborhood to compete for the same money to accomplish the same goal!

In February 2017, Jasmine was selected as a member of the Mayor’s Office of Public Engagement Millennial Advisory Board. She also spoke about improvements to the 25th Street Viaduct at the 2016 Philadelphia City Planning Commission annual celebration. 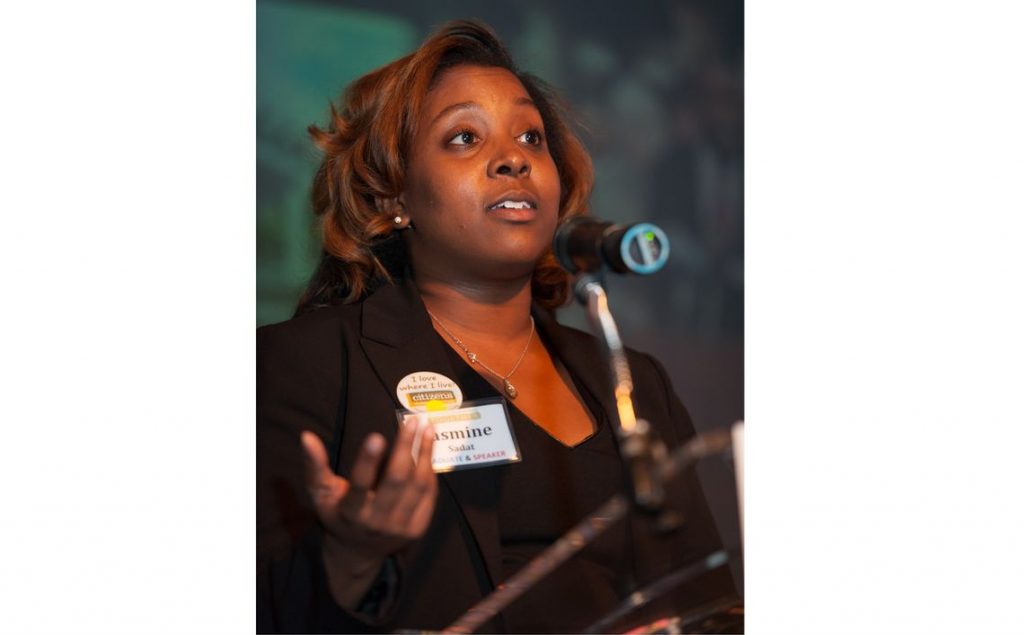 Jasmine speaking at the Planning Commission annual celebration in 2016