I organized with my neighbors to shape the change happening in our community.

At the center of Jackie Wiggins’s work is ensuring that historically underrepresented communities have access to information, especially about changes that affect them and their environment. Jackie’s favorite part of CPI was the class on community engagement because of its focus on community education, so she was thrilled to present her own efforts as an instructor at CPI’s Spring 2017 community organizing class!

More and more people should participate in CPI because it instills people with one of the greatest forms of knowledge – the knowledge that you have the power to affect change. 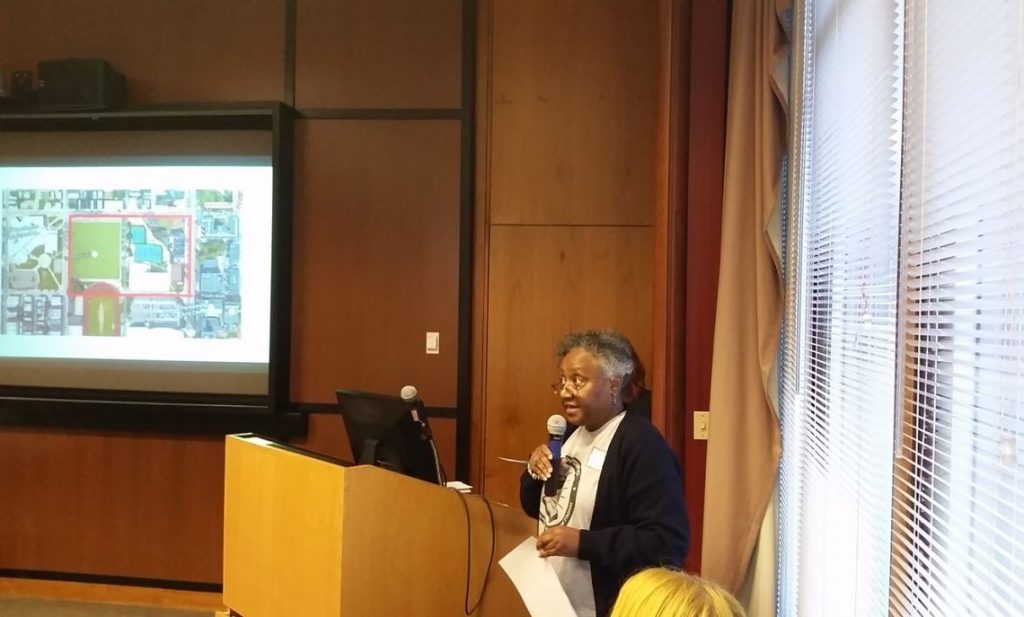 Before taking CPI, Jackie was already deeply involved in her community as a member of Stadium Stompers, a movement of residents and students established to prevent the construction of a 35,000-seat sports stadium in North Central Philadelphia. Jackie described how the plan to build the stadium was met with criticism from residents and students because it was expected to create additional parking, traffic, crime, trash and noise problems in the surrounding community. In an effort to get the word out, the Stadium Stompers staged various actions including rallies and regular meetings on the 2nd and 4th Wednesday of every month at the 18th and Diamond Street church, appropriately named Church of the Advocate.

So many people did not know [about the proposed stadium]…we had folks that knew media, so we had press releases ready, we had folks that did door knocking…we did all the things that you had to do to let people know…we ended up with hundreds of signatures on our petitions.

Beyond her work with Stadium Stompers, CPI inspired Jackie to create a series of display boards about resources available to neighbors, which she presented at her church. 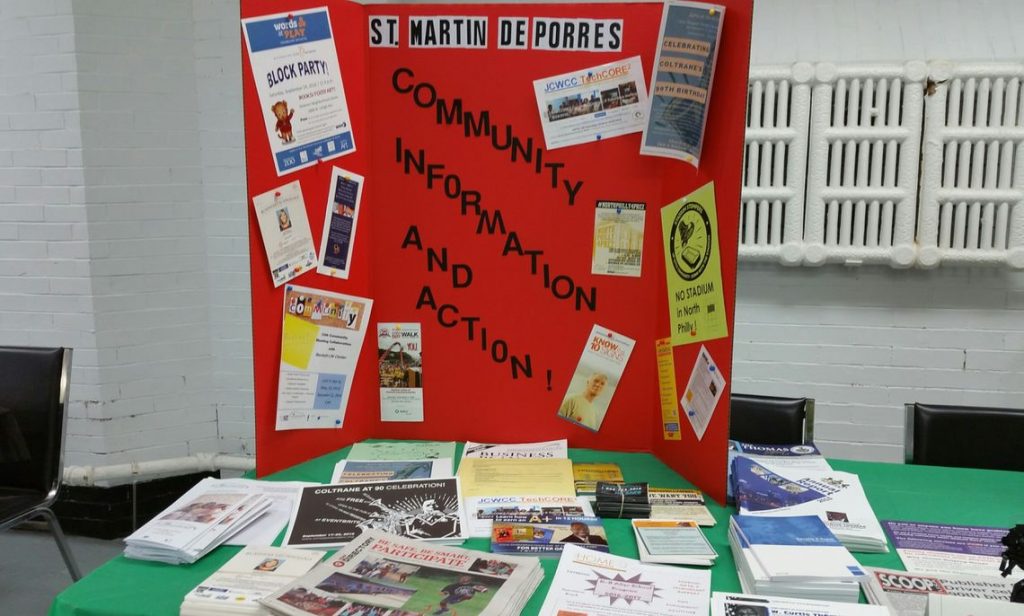 The community information board that Jackie created 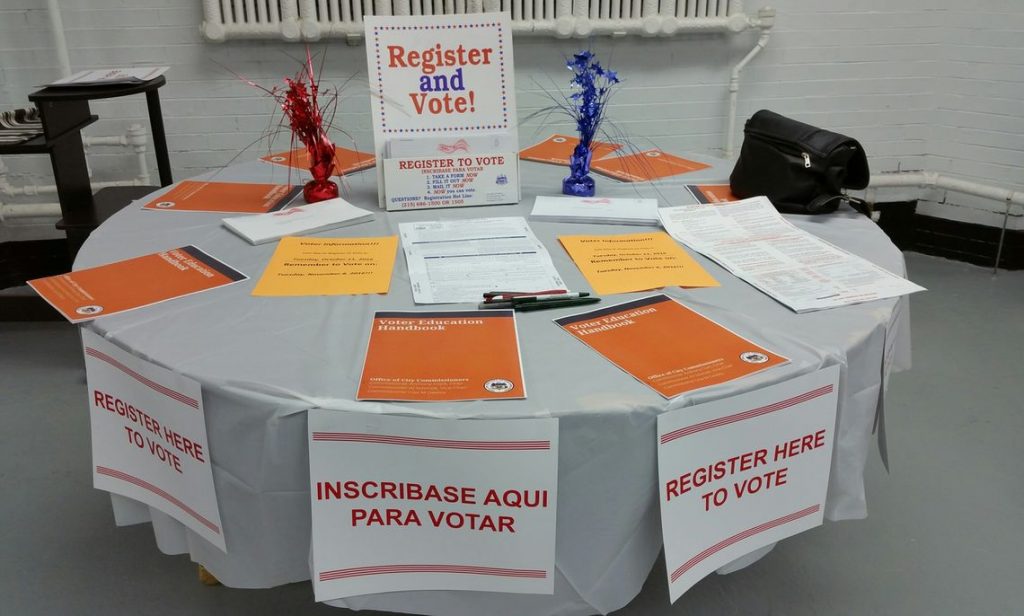 A voter registration table that Jackie set up at her church 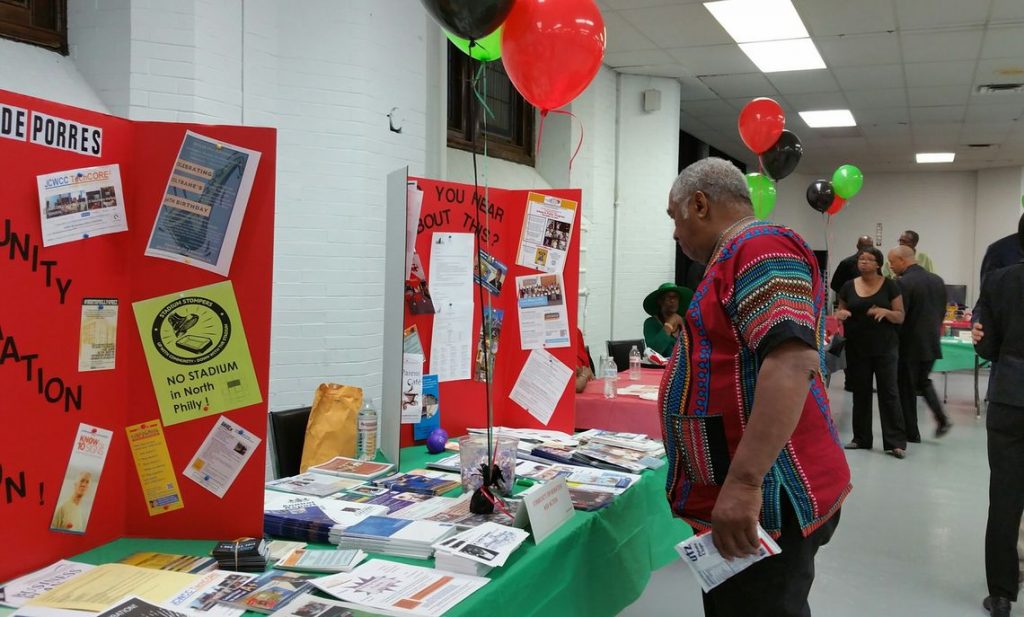 Now, she continues to spread the word about available resources through the newsletter she sends out as part of her role as a committeeperson.

Jackie initially found out about CPI through Ruth Birchett, a Citizen Planner from her neighborhood. Together, Jackie and Ruth testified against the relocation of the 22nd Police District station to a site on Diamond Street across from a public housing complex. They reiterated the need for communication between authorities and all stakeholders in the decision-making process.

We opposed the proposed relocation because of the long history of over-surveillance of black and brown communities, especially those of low-income. I lived in public housing in the 50s, at Raymond Rosen. Why must people of color have such a police presence still in 2017?

Jackie also works with Stephanie Hardy-Ridgeway, a fellow Citizen Planner from her CPI cohort. Jackie has participated in Stephanie’s efforts to properly regulate neighborhood ‘Stop-and-Go’ stores. Stop-and-Go is a term used to describe neighborhood stores that sell beer and malt liquor, often located on corners or along commercial streets. They have restaurant licenses which require them to sell food, seat at least 30 patrons and have an accessible restroom, in order to sell alcohol.

Stephanie arranged a visit to two stores in the North Central Philadelphia neighborhood, accompanied by  committee people, clergy, Jackie and other residents residents, a staff member from their City Council office, and reporters from radio station KYW. Upon visiting, they found that the two Stop-and-Go’s failed to comply with the requirements: they had little to no seating and inaccessible bathrooms. Thanks to Stephanie’s walk-through and the news coverage, local elected officials have started to take the matter seriously, reviewing cases of non-compliance. A bill was also passed by the state House which imposes harsher penalties for non-compliance.

Jackie’s work is personal. In her years of community advocacy, she has seen elders at community meetings on the brink of tears, feeling overwhelmed by their inability to partake in the changes happening in their neighborhood. To prevent youth from encountering similar feelings of powerlessness in the future, Jackie has begun speaking to young adults about becoming politically active, starting from small roles like becoming block captains and gradually moving on to larger positions.

When asked about her dream project, Jackie doesn’t hesitate to respond. She says she’d like to have a group of 500-1000 people ready to mobilize for public hearings or other public actions, about issues faced by underrepresented communities. She hopes that people can come together with a unified voice to proclaim their needs and desires, quoting the African proverb, “when spider webs unite, they can tie up the lion.”

The first step, Jackie says, is to coalesce. With the help of other community members, she has already begun to do so. She quotes: “Pamoja Tutashinda—Together We Will Win!”