I try to be a catalyst that connects [architecture] students to people.

You can combine the energy of the student with the knowledge of the resident and get really cool stuff. [The relationship] moves beyond a professional commitment to a personal commitment to each other. That has long-term value.

Andrew Hart is Assistant Professor of Architecture for Visualization and Computational Design at Thomas Jefferson University’s College of Architecture and the Built Environment in East Falls. As a resident of North Philadelphia, he encourages his students to engage with the communities around them.

I wanted to come to CPI and listen and meet other people and not be Mr. Design Professional. Because there are a lot of other questions, and if it’s just architects asking questions, you only get one kind of answer. I try to teach around a model that has sustained values like CPI has. I encourage students to listen to the community around them, rather than coming in and saying, ‘I’m a design student. I’ll solve your problems.

Andrew advocates that an approach based in listening has more to offer everyone. For the past three years, Andrew has led neighborhood tours for students in Jefferson’s Architecture Studios. On Andrew’s tours, he delves into socioeconomic, cultural, and historical factors. Students meet people who live on his block and in his community.

Design studio can be a bubble, but the city is great laboratory. Every semester, we organize events through Sharswood and Brewerytown to see the whole picture. We’re talking to people, sending students to the RCO [Registered Community Organization] meetings. We’re looking at designing housing that sustains itself and sustains the community socially as well as environmentally. 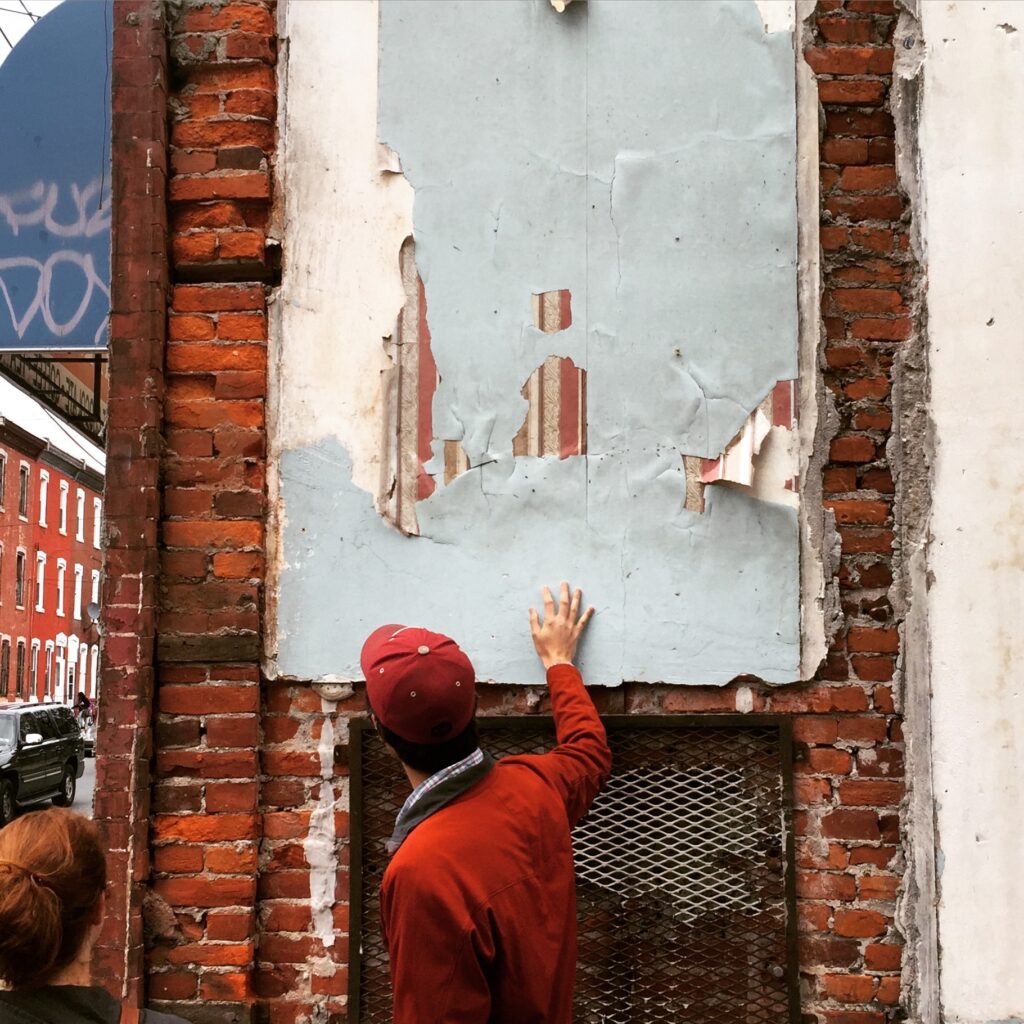 Andrew Hart leading a community ‘Jane’s Walk’ through the Sharswood / Brewerytown neighborhood discussing the stories imbedded in the walls of this former rowhouse. Echoes and traces of plaster and wall paper are often called ghost buildings.

Andrew also helps amplify the stories of community members by sharing them with the rest of the city. He works with students in Jefferson’s Architecture Studios, taught by Adjunct Professor Max Zahniser and Adjunct Professor John Hubert, AIA. The students enter a sustainable design competition, sponsored by the US Department of Energy, called the “Race to Zero Competition.” Around mid-May, students present the design at the neighborhood’s local RCO meeting. Last year, students from the class got 1st place in their category.

The community also worked with Jefferson, Temple, and University of Pennsylvania students to create a traveling exhibit at each of the schools. The group created two events: a panel discussion at Temple and a presentation at Jefferson. The teams from Jefferson presented their work to the community at their RCO meeting. 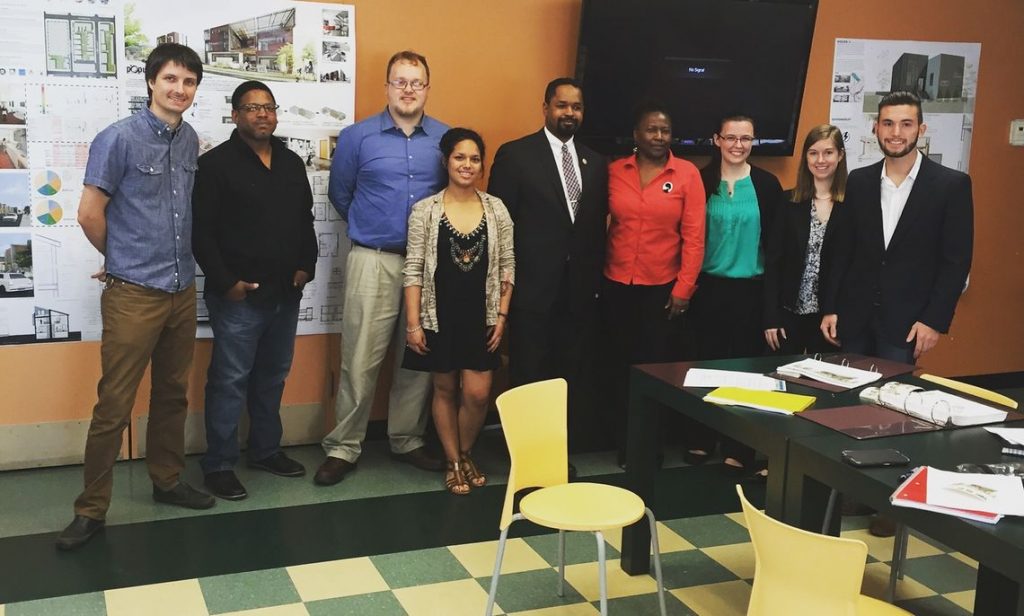 These student-community relationships have influenced students’ decisions about living in the community. Three or four students who have graduated have decided to move into the neighborhood. Two of these students were also part of the first cohort of the class!

Andrew also advises students who study historical preservation. For the past two winters, the students have worked with the Fairmount Park Conservancy to install Christmas decorations on historic mansions. This work is not done for a grade. Instead, students do this work to learn about the mansions and meet community members. Some students work with window restoration in historic Rittenhouse Town. They learn how to preserve and install historic wood windows.

More and more, preservation is not just about, ‘This is old. We should keep it.’ It’s more about, ‘There [are] a lot of stories embedded here, and telling those stories is important’.

Over the last two years, Andrew has also helped organize a parklet for PARK(ing) Day Philadelphia. This event is a partnership between Jefferson and the Young Friends of the Preservation Alliance (YFPA). Sustainable design students and alumni build temporary exhibits to explore sustainable preservation practices. This year passersby added their favorite landmark and legacy historic businesses to a map.

Instead of being hierarchical, I tell them, ‘Here [are] the resources we have. Here [are] some interesting seeds you can nurture. What ideas do you have? What resources do you need?’

CPI is this huge interconnected web. As soon as you see that CPI is on someone’s resume or bump into Donna somewhere, someone will tell you, ‘You should talk to that person.

For example, Andrew met someone in his CPI cohort, who became his student in the fall. “It was amazing to see how he took what he learned from CPI and applied it at the university. What a cool way to meet somebody in a non-hierarchical way. It was very democratic, very open.”

Andrew is also an artist. Building off of a project he started during CPI, The Sounds of Ridge Avenue, he created an exhibition last April titled “Rocky Reruns.” The exhibit delineates a history of the Rocky movies across the neighborhoods of Philadelphia.

What everybody remembers about the movie isn’t what it actually looks like. It’s a lot of stoops [and] post-industrial neighborhoods. If you live in Philly, it’s the stuff you know and love about Philly.

The exhibition was a month-long collaboration between thirteen artists and architects. Presenters at the exhibit included Thomas Schomberg, the artist who sculpted the Rocky statue. Schomberg exhibited his maquette and spoke about the importance of sculpture in the City. Former Philadelphia Inquirer writers who wrote The Rocky Steps presented about their book, which is about people who come from around the world to run up and down the steps. Ken Jacobs, a History professor at Drexel, Temple, and Jefferson Universities, talked about sculpture and film in the city. People from all over Philadelphia, including Sylvester Stallone, who was filming the movie, “Creed,” came to see the exhibit

I found CPI’s model inspiring and have tried to see how that model can expand not just to a community group but to a classroom and to an art gallery.

CPI gave Andrew, a designer and professor by trade, knowledge about community organizing. This knowledge has helped him advance projects he is passionate about.

At first I was like, ‘I’m a designer. I understand what to do.’ Then I realized there’s a lot of stuff that happens on the community side that I didn’t know about. So I decided I should sign up for CPI.

For example, Andrew recently worked closely with his community and a developer for a year and a half on a project. Through tools he learned through CPI, he was able to negotiate with the developer to give his community a voice.

I brought out the CPI handbook, because we had a developer working on our block. I knew what we needed to do from a community organizer perspective. I said, ‘Here’s a checklist. We’re gonna go through all this stuff.’

Although the project did not come to fruition, Andrew is grateful for the knowledge he gained through CPI. They were able to expand the project in a direction that worked for everyone. He also grew his network and met new people in his community, including the pastor and membership of the church on his block. The church offered their Fellowship Hall to the community as a meeting space.

By the end of the project, Andrew’s neighborhood had become even closer, attending social events together, like Quizzo. The neighborhood also selected a new block captain.

Our elderly neighbor needed some help, so we got her a system to get her some assistance. Then, she became a block captain because we didn’t have one at the time.

Andrew helped the new block captain enhance communication among neighbors. Together, they scheduled a block cleanup. The block also created a 311 “text chain,” which helps issues on the block get resolved more quickly by 311. Different people on the block specialize in resolving different challenges. For example, one person knows exactly who to contact to resolve issues about graffiti. Another issue in the community is the overlapping RCOs in the area. Block members rotate attending the different RCO meetings. Now, Andrew often runs into people who say that his block is their favorite block in the neighborhood.

There’s value in the intangible culture of the sidewalk that we ended up building.

Andrew is grateful to CPI and hopes to spread its message to community members whom he meets.

Now, the responsibility is to be an envoy and take those lessons from CPI and share them with more people and disperse that energy and connectivity.

Andrew is especially grateful that CPI taught him the importance of listening.

We all have an opinion about how something should be done. But the biggest thing I got out of CPI was just listening to all the other voices in the room.

There is a collective knowledge and experience in the people that live on your block, the people who were in CPI with me, and the people who came to present. Aggregating all those opinions gave me the confidence to form an idea that wasn’t birthed from my own bias. As a designer, I can look at the world through a very specific lens and I’m passionate about that. But it’s even more important to see what other people are passionate about and share that with them.

Having that space in CPI to listen to the collective passion of everyone energized me about what I’m passionate about already. But it also let me connect in new ways to the city and the place that I love.